Elona, Land of the Golden Sun, is a region where the sun is brightest and is home to the three human provinces of Istan, Kourna, and Vabbi. Though divided, they still help each other when needed. However, before they were divided by the Pretender Wars during the Shattered Dynasty Era, which were the bloodiest wars Elona ever saw, the three provinces were united under the Primeval Kings. 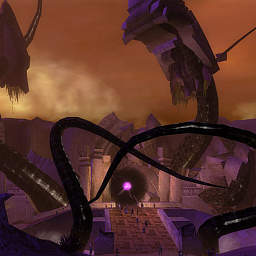 Overall, little is known about the Primeval Kings except for a few individual names, a degree of their reign, and that one of them, Queen Nadijeh, established the Sunspear Guards – the original name of the Order of the Sunspear, which now protects all of Elona.

The Primeval Kings reigned for over six hundred years during the era named after them: the Primeval Dynasty. From 200 BE (Before the Exodus) until being wiped out by the still-mysterious Scarab Plague in 452 AE (After the Exodus), the Primeval Kings’ rule was firm and widespread. They ruled all of Elona and had their lands stretched from the island of Istan to the northeastern Vabbi and far into the northern Crystal Desert where their Tombs of the Primeval Kings now lie. Aside from the famous Tombs of the Primeval Kings, there were also the Dynastic Tombs located in the southern portions of the Desolation, along with other structures throughout the now-deadly region. They even held a colony in the Tyrian mainland, the land now known as the kingdom of Kryta. Compared to all other human kingdoms, they had the widest rule near the end of their reign.

These kings ruled from Istan, in the city of Fahranur, nicknamed The First City. It was here that the Scarab Plague, described as being a plague where insects burrowed out of humans, was believed to be caused by their eggs being eaten with their food. Though initially contained within Fahranur, the plague spread throughout Istan and eventually ended the Primeval Dynasty. 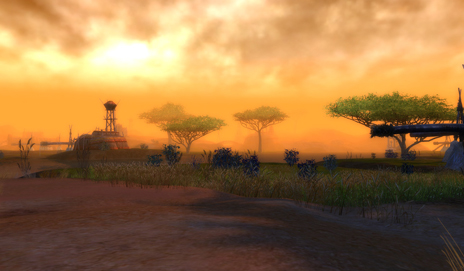 Southwest of the Elonian mainland is a huge island called Istan. This island was one of the first locations where humanity touched foot on Elona and, as implied by Fahranur’s nickname, was the home to Elona’s earliest human settlements.

After the Scarab Plague ended, it took another sixty-eight years before settlers began to return to Istan. Once a small port, Kamadan grew into a large city and became known as the Jewel of Istan. From Kamadan’s harbors, traders go to the mainland, Tyria; Cantha; or to one of the many small islands around Istan. In that same harbor, the Istan fleet is stationed; this navy is the pride of Istan and renowned throughout Tyria. Most Istani live either on trade or by fishing. Ever since the Scarab Plague, those on Istan reward acts of bravery and achievements with promotions, eventually leading them to be part of the meritocratic government. Among this government, each village has an elder, each elder governing many towns and outposts. Many of these elders are also part of the Council of Elders, which governs Istan as a whole. The elders in the council are elected through their deeds; among them, one is elected as Clansmarshal who leads the council in its decisions. Also on Istan lies the home to the Order of Sunspears. 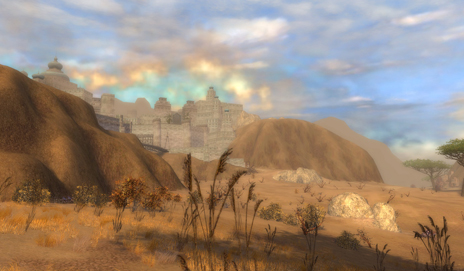 On the southern portion of the mainland lies Kourna, surrounded by harsh conditions with little water and many savannahs and dangerous wildlife. Kournans are tough and they have their military to show it; Kourna is known for military history and is even ruled by the military, led by the Warmarshal, which for the past two hundred years has been passed down through the Ossa bloodline. Some of the greatest wars in Elonian history were fought in or near Kourna, the most famous of them being the Battle of Jahai, between the forces of Turai Ossa and Palawa Joko.

Along with its government, Kourna’s culture is focused around its military. If a Kournan doesn’t work within the army, it is working to support and supply it. In turn for their services, Kournans receive protection. While the average Kournan tends to live in simple houses, their fortresses are grand and large. The capital of Kourna is Gandara, the Moon Fortress – which, as the name implies, is a coastal fortress shaped like a crescent moon. Being the capital, it is also where the Warmarshal resides most of the time, and it also acts as a major port for Kourna.

Also within the borders of Kourna is the land where the centaurs live. Over the centuries, they have been at war with the Kournans and are now on the brink of destruction, forced into the wilderness near the Desolation to the north or, worse, into slavery. 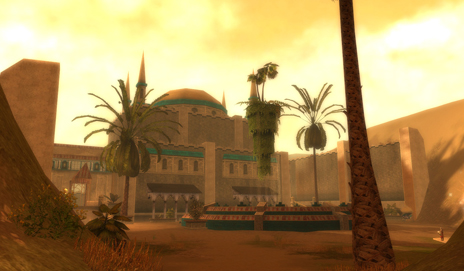 In northeastern Elona is Vabbi, the richest of the three provinces. Other than their wealth, which comes from various gem mines in the wilderness, the Vabbians are known for their well refined culture. The Vabbian leaders are known as Clanmarshals, who are more commonly referred to as princes. Unlike royalty, however, the rulers of Vabbi are determined by wealth and not hereditary. Currently, Vabbi has three princes – the Merchant Princes – that stand above the rest, being far wealthier than any other Vabbian. The Clanmarshals make the laws and make sure the Vabbians obey those laws through the military. The military of Vabbi is not a united force but instead is divided and each division works under each prince.

Vabbians live in luxury, having servants, expensive clothing and more; they enjoy the finest art, food, drinks and theatre – the last of which makes Vabbi very famous throughout the world. Vabbi also produces some of the most famous actors, such as Norgu, a member of the most renowned actors’ guild, the Lyssan Fools. They’re also known for their large parties and festivals, the most acclaimed being the Festival of Lyss in which they honor Lyssa, the twin goddess of beauty and illusion. Lyssa is the Vabbian’s patron goddess and is revered by most in the province. Most Vabbians say that Lyssa shaped the land and molded the Vabbians in her own glorious image. There is also a belief connected to Lyssa behind the Seborhin Tree, said to be nourished by the light of Lyssa’s smile; they believe it is Lyssa’s favorite tree and when a leaf falls on you, Lyssa is watching over you. All of the Vabbians live either in big cities, such as the Kodash Bazaar, or small towns, like Mihanu Township. The Vabbians are also famous for their architecture which can be seen in their big cities.

Alongside the colony of Kryta, there was a second colony of Elona, established by Turai Ossa during the Great Pilgrimage into the Crystal Desert in search of Ascension. Its name was Elonia and those from it shared the same name as those from Elona – Elonians. Being situated primarily in the Arid Sea and Elona Reach, it was a short-lived colony. Exactly how long Elonia thrived is unknown, but within a lifetime the colony of Elonia was divided into at least three groups, perhaps more, and eventually annihilated. In the north, the Elonians divided themselves as they squabbled to protect the three shards of the Vision Crystal required for Ascension. In the south, the Elonians built the Temple of Ascension and its Throne of Pellentia in an attempt to gain the attention of the gods, and soon began fighting amongst each other as well (though they may have been the same three groups as in Elona Reach), eventually creating a powerful weapon which destroyed them all. There was also a town, Lannur, in the northernmost reaches of the Desolation which was built by Turai’s pilgrimage, the ruins of which can now be seen in the Crystal Overlook. Now, their task incomplete, their souls wonder throughout the Crystal Desert and even in the Desolation, hoping to one day see the completion of their life’s goal.

Another extinct group of humans from Elona, the Margonites were once an ancient seafaring culture. They roamed the coast of Kourna and the Crystal Sea that was once the region where the Crystal Desert now lies. Being a seafaring culture, they had a heavy worship of Abaddon, who was the god of water and secrets before his fall. When Abaddon fought the other five gods, he transformed many of the Margonites into ethereal demonic beings, ending their humanity altogether. When he was cast down into the Realm of Torment, they were imprisoned there as well to share the same fate as the god they so loved. 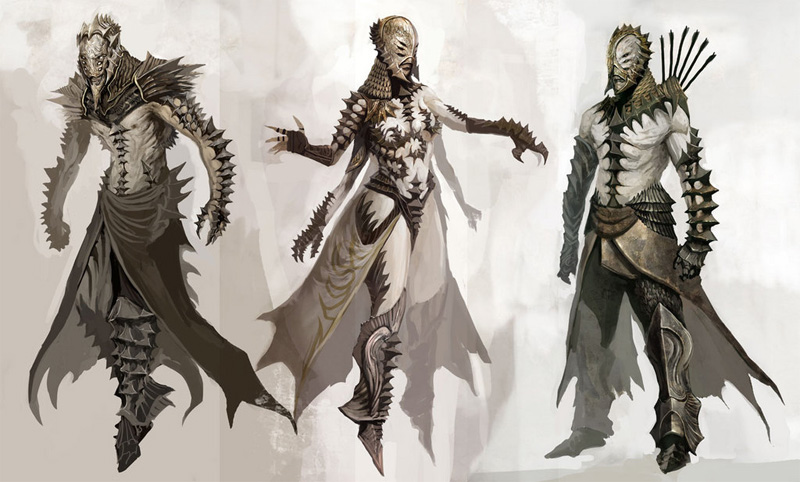 After Abaddon’s fall, a group of Margonites dwelt in the newly formed Crystal Desert – whether these Margonites were still human or have become demonic is not entirely known. This group of Margonites took apart their wrecked ships to build structures and attempted to reach the heavens where the gods were resided. Only a handful of ghosts from their human days remain now in the Thirsty River.


There also exist other settlements and former kingdoms throughout Elona, all of which are no more. Even when they existed is not entirely known.

In the center of the Desolation, bordering the Mouth of Torment, lies the now-ruined city of Morah. Once a majestic city, it was built to overlook the place of Abaddon's downfall but eventually succumbed to the spread of the deadly desert. When it stood is unknown, but given information implies it was once a part of the Primeval Dynasty, as it was established after Abaddon's fall and before the Desolation became sulfurous.

Another famous location along the inner border of the Desolation is the Remains of Sahlahja. Once led by a line of kings, it fell to Palawa Joko. In fear, the last king, King Sahlahja, struck a deal with the undead lord to spare his people. In turn, however, Joko betrayed the king, slaughtering his people and entrapping the king into eternal servitude. Now the kingdom remains as part of Joko's reforming kingdom. When this small kingdom flourished is unknown, only that it was no later than the beginning of Joko's invasion into Elona in 860 AE.
The unofficial Guild Wars magazine.
© 2003-2011 ArenaNet, Inc. All rights reserved. NCsoft, the interlocking NC logo, ArenaNet, Arena.net, Guild Wars, Guild Wars 2, and all associated logos and designs are trademarks or registered trademarks of NCsoft Corporation. All other objects are the property of their respective owners.