Community Reaction to the Engineer


Short of the removal of dedicated healers (and the breakup of the classical idea of the holy trinity this causes), the introduction of the engineer is one of the most daring moves on ArenaNet’s part in the development of Guild Wars 2 – to the point that there was a conspiracy theory among some in the fanbase that the engineer was released before the expected mesmer on the basis that the mesmer release could win back fans that were disgusted by the engineer. Paradoxically, this is because the engineer both is and isn’t new to the genre.

As far back as Tolkien, there has been an unwritten rule limiting the level of technology present in a fantasy setting to a pre-firearm level (although, anachronistically, still containing armour designs that were historically made to protect against early firearms). Sometimes there’ll be a firearm or two that are essentially treated as super-crossbows or a culture or two that employs advanced technology (usually as compensation for lacking magic) but most of the setting will generally remain comfortably technology-free.

Until the release of the Engineer, despite ArenaNet’s comments about the world having advanced, Guild Wars 2 did seem to be fitting this general mould. You had one profession each with rifles and pistols… which could probably be replaced by large and small crossbows with little change in the mechanics. You then had the technological charr and the technomagical asura, but the belief existed among some of the fanbase that these would still be restricted to the areas of those races, something like the technological goblins in Dungeon Siege that can be visited for a change before getting back to the serious fantasy. The engineer as a playable character overturns all that, since in a persistent world no matter where you go there’s nothing stopping a norn or sylvari engineer running up and popping a turret next to you.

However, this isn’t the first time this unwritten law has been broken. The eight hundred pound gorilla in the MMO genre (you know who I mean) has engineers, although there it is a crafting profession rather than a class that fights. A closer precedent is in the Warhammer Online engineer… which, if the opinions expressed on the forums before ArenaNet released their version on the engineer are to be believed, was an abject failure. So while on the one side it’s different enough from the usual fare to be a risk, it’s also not so original so as to avoid the charge of ripping off the competition. Thus, it’s no surprise that the unveiling of the engineer resulted in a polarised reaction from the community. This has come in a number of forms.

One part of the discussion has been the question of whether the engineer is a suitable substitute to the ritualist. The official line is that the engineer is not intended as a replacement for the ritualist, but it does clearly fit a similar playstyle, and articles from before Factions released reveal that the ritualist did spring from seeking to introduce a playstyle like the Team Fortress engineer into a setting that lacks the technology that normally supports it.

Regardless of the ritualist’s history, however, it did build a core of dedicated followers among Guild Wars 1 players, and the reactions between them have been mixed. For some ritualist players, the aesthetics of the spirit-wrangler are as important as the playstyle, and the engineer – which appears to be aiming to fill the same playstyle – represents the death knell to any real expectation of their favoured profession making the transition to the sequel. Others acknowledge the change, but also recognise the similarities between the new turrets and kits versus the spirits and item spells of the past, and look forward to trying out the new system.

While the likely ultimate inspiration for the Guild Wars engineer has been mentioned, it is certainly a broader profession than its source. As one observer mentioned, it’s not just the engineer, it’s half of the Team Fortress classes in one – as well as the titular engineer, a flamethrower kit makes a pyro, grenade and mine kits makes a demo, and the med kit and the elixir gun make a medic. 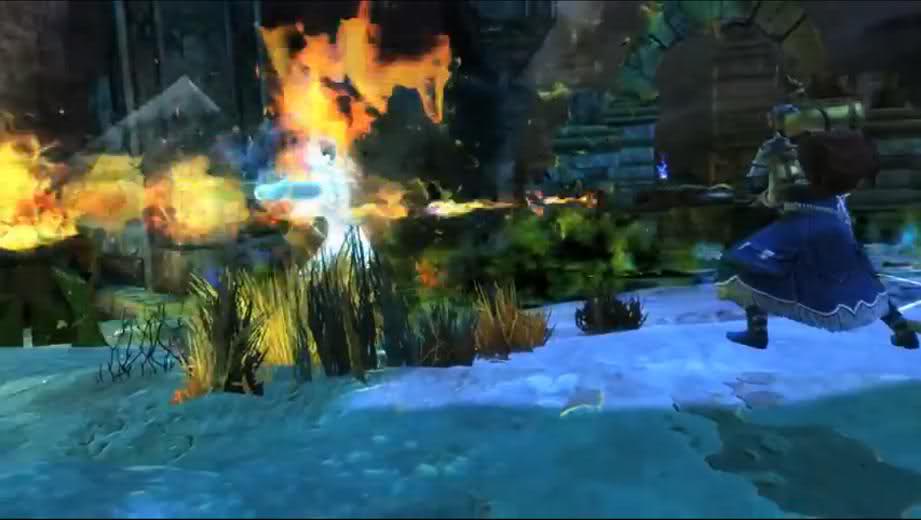 How this is regarded, however, varies. Some see this as good – another example of ArenaNet drawing inspiration from another source to shake up the MMO genre, while creating a vector for players that might not otherwise play an MMO to try the genre. Others think that the two genres should remain separate, and even fear what effect an influx of first-person shooter players might have on the community. 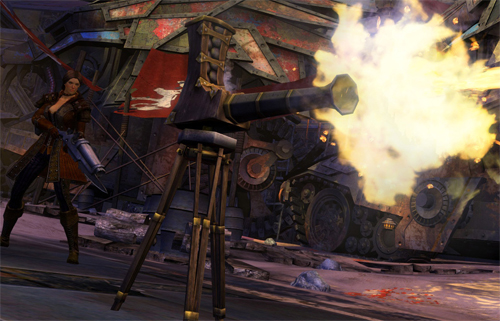 As described in the opening, the introduction of the technology-based engineer represents a significant increase in the real penetration of technology into the setting. We were told and in some cases shown that some areas in the world had strong technological themes, but previous professions could easily fit into a classical fantasy setting with minimal if any modification. The engineer, clearly, can’t.

For some, this is to be commended as the company sticking to its guns when it comes to the advancement of the world’s technology level. It’s not just something crazy pushed into one corner of the world – it’s now possible to create characters that embrace technology unreservedly instead of adopting a limited selection of gadgets.

However, there is still some resistance to this idea of progress. Advanced technology is certainly a different aesthetic to that normally associated with fantasy, and not one that they like. For some people, it even serves as a threat to immersion, or to the escapist quality of the game – the appearance of technological devices too similar to today’s serving as a reminder of what they’re trying to keep their mind off. Others point out how some of the things that the engineer is based on represent capabilities that are not even possible today, such as the ability of turrets to independently identify and fire on hostile targets without risk of targeting allies instead.

This question also has a middle ground – people who approve of the technological advancement in general terms, but find some parts that are just too close to modern. The prime example of this is the infamous digital beep and LED-like flash on the mines. While it has been pointed out that there are valid gameplay reasons for this as well as explanations for how it may have appeared apart from electronics, the truth is that for some it really does appear too reminiscent of not just the modern era in general but the computer age specifically. It has also been pointed out that different effects may produce the same gameplay result. 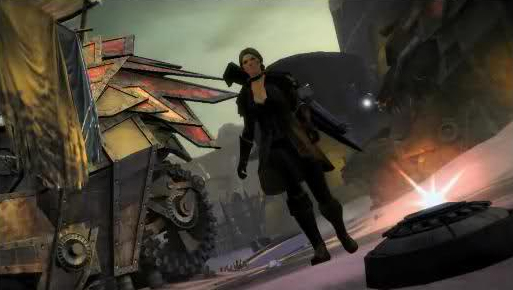 A second offender is found with the grenade kit – while grenades (and, for that matter, flamethrowing devices) have existed for much longer than most give them credit for, some of the icons at least appear similar to the grenades found in modern inventories.


Another criticism of the engineer that has arisen is the question of just how universal it is in a game where every profession is available to every race – in the eyes of some, it is far too charr-oriented a profession. The close-to-nature norn and sylvari are most commonly cited as races in which the engineer doesn’t fit, but even humans (with the lack of obvious steampunky technology in their cities) and the magic-specialised asura have been mentioned as not suited for the technology-focussed engineer. 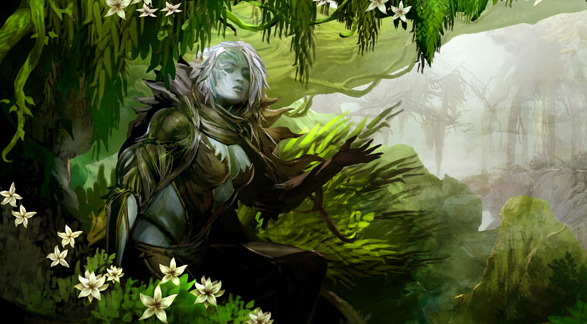 Answering this, however, the proponents point out ways in which other races might indeed adopt the toolbelt of the engineer. A sylvari or asura might become curious enough in the new technology to specialise in it – and working some magic into the groundwork laid by the charr may well fill in some of the gaps that cannot be breached by contemporary technology alone. Humans have their own Leonardo-like figure (mentioned in the redo of the human page during Human Week) who may prove to be an inspiration or even mentor for player character engineers, while norn culture allows for a variety of ways for seeking glory – a great craftsnorn is worthy of respect, but a great craftsnorn that takes their inventions onto the battlefield to achieve worthy deeds may be even greater.

Finally, one last element that has naturally garnered a lot of attention is the engineer’s kits, backpacks, and other devices. The backpacks themselves have attracted some criticism for being big and ugly, but otherwise they seem to have been received as a novel way to introduce unique weapon-like objects into the game. The lack of a cooldown for kits – a decision likely made so that kits with every skill on a cooldown don’t leave you stuck once they’ve been emptied – has also gathered some attention as allowing the possibility for complex kit-flipping skill combinations.

However, a recent concern that has arisen is that the profession may be a little too reliant on them. In the speculation before the engineer was revealed, pretty much everyone scoffed at the idea that the mystery third adventurer, called ‘Gunner’ by some, would actually rely exclusively on rifles and pistols, and yet if you ignored the kits that really is pretty much what they’ve got. Furthermore, so far the most interesting skills to be found on the toolbelt – which takes up the space occupied by the special profession mechanic in other professions – are those associated with kits. This has lead some to feel that the way the profession is set up might lead an engineer that doesn’t make use of kits to be rendered bland compared to other professions, limited as they would be (since conventional weapon-swapping is not available to the engineer) to only the skills associated with a single weapon to go with their utility skills.

Another aspect that has garnered some criticism is indications that kits will not be customisable in appearance, prompting fears of enforced conformity and more specific dislike from those that haven't liked the look of one kit or another.

One thing that must be remembered with all such discussions, however, is that very few of the fans have had the opportunity to try the engineer as yet. Reports from those lucky few who did have been glowing so far - although, to be fair, it can certainly be argued that so far they have not had enough time to evaluate what flaws may exist in the profession. Either way, a full judgement cannot come until its evaluation in the demos of the coming season - and of the beta testing that is sure to (eventually) follow in the months to come.

The unofficial Guild Wars magazine.
© 2003-2011 ArenaNet, Inc. All rights reserved. NCsoft, the interlocking NC logo, ArenaNet, Arena.net, Guild Wars, Guild Wars 2, and all associated logos and designs are trademarks or registered trademarks of NCsoft Corporation. All other objects are the property of their respective owners.