Dungeons: The Structures and Their Builders

It’s no secret to anyone who has ever played Eye of the North that the imposing dungeon system that spans the underground of Tyria is rich with wonder and intrigue. And while we get to explore and fight our way through them in our quest for glory and gold, not many take the time to examine the evidence left behind as a shadow of their former history. What is the origin of these structures? Were they built by the same people responsible for the Eye of the North? A thorough investigative venture would begin to unearth that the origins of these continent-spanning underground systems are far more curious than first meets the eye, and may point to an underlying factor that could very well have shaped human culture in the whole world of Tyria.

The architecture in the dungeons of the icy north seems to have a consistent theme of ice and stone. Carefully carved into the body of the majestic Shiverpeaks, it appears to be an enigma as to how a system so intricate, large, and complex can have such consistency throughout much of its parts. Evidence points to a grand designer in the construction of these systems, full of a consistent trend of ice and stone carved into the most intricate shapes. Humans certainly weren’t responsible; they’re a scarce sight in the far north. As far as the dwarves and asura, it is said they did not build these networks, but rather stumbled upon them and took to their care and restoration. Who, then, is responsible for such a massive feat? One thing we know is they definitely lived before the time of men. Thus, many signs point to the seers, the elusive and mysterious race we briefly encounter during the course of the game.

Inside the dungeons themselves we seem to encounter a main trend amongst many of the dungeons. That is, walls of ice carved into blocks and placed carefully like bricks. Sometimes, these ice bricks cover walls made of stone, possibly as some sort of insulation, but why? Are there more chambers we don’t know of behind these mysterious walls? Stone walls which appear curiously similar to those across the great sea, in the Echovald Forest. Not only that, but there also seems to be a great abundance of carvings and statues suspiciously similar to architecture of Ascalonian origin, particularly that in the Catacombs. We know for a fact that these dungeons far predate the dawn of humanity, so how could such architecture end up so far north, so far underground? The most likely explanation, the builders of these caves, the precursors to humanity, influenced the culture and intellectual prowess of men after their unexplained disappearance. 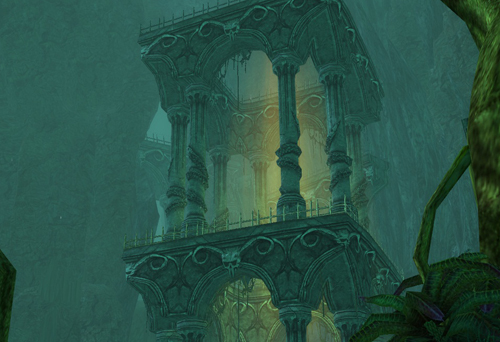 A prime example of such influences are a peculiar style of pillars seen all along many of the dungeons up north, a detail which goes unnoticed to the casual onlooker. These snake-wrapped stone pillars, seeming both as decorations and as structures to hold up the stone and ice arches separating chambers in the dungeons, can be seen in the initial dungeon on the way north, when we first meet Odgen and Vekk. They can also be seen in Sorrow’s Furnace, along many of its excavated paths, as well as throughout the entirety of the Depths of Tyria and Jaga Moraine. The Cathedral of Flames, Vloxen Excavations, as well as the Tarnished Coast contain many ruins of seemingly Ascalonian origin, as well as said snake pillars, sans the snakes on occasion, though the style of the pillar, as well as the carvings on its bases, remains the same. Also present are the infamous stone faces, mysterious heads carved into many Ascalonian walls and bridges, displaying a ferocious complexion most players are familiar with. Where else can we see structures such as these? Well, in the Catacombs of course, there is also a great influence of religious symbolism throughout the underground systems. Statues of the Six are present, though few and far apart, inside the underground chambers. Grenth statues, for the most part, can be seen in Spechlure of Dragrimmar and Raven’s Point, though they seem to be in ruins. Did the ones who came before worship the Six? Or were these dungeons simply renovated to fit the religious beliefs of its new tenants before they too disappeared?

More amazing, however, is how a race in the far north could have ever affected the architectural trends of the people living down in the Echovald Forest, a world away. Though we know tunnel systems exist between the two continents, the dredge escaped Stone Summit oppression through one such underground system, it’s curious how the Kurzick themselves admit to not being the original creators of such architecture, mentioning that the ruins in Altrumm are not of their making, but was their inspiration. These ruins, interestingly, are very similar to parts of those found in the far north. It is evident, therefore, that this old elusive race managed to influence most, if not all segments of humanity and the way they made a home for themselves. Perhaps they even managed to get to them when they were still few and close together geographically.

And so the mystery stands, just who were this ancient race that spanned the continents? Parts of the architecture hold some similarities to that found around the Rift. Perhaps they moved on from their earthly forms into a more ethereal form of being? Maybe they just went extinct, due to war, plague, or whatever ills may have stricken down upon their civilization. We know, however, that their influence spanned much of the known world, far earlier than men were around. And judging by the style of statues found in many of the dungeons, humanoid in shape, with perhaps a set of horns to match. Thus, we know them not to be the asura or dwarves, and certainly not the forgotten, another possible suspect. Perhaps they were the seers, or maybe the mursaat we are already quite familiar with, despite the large air of mystery around their origins and existence.

One possibility, however, is that it was not one, but many races who built these systems far before the dawn of men. It is evident that though very similar, there are many slight differences between the dungeons in different parts of Tyria. Could the peoples responsible be not one singular race, but instead a council or committee of sorts, vowed to the progress and development of Tyria before their unexplained demise or division? It’s hard to say, however, given how little evidence we have to go for. For now, we can only hope that the upcoming release of Guild Wars 2 sheds some light on the truth of these very mysterious structures inside the world of Tyria.

For a more detailed look into the Depths of Tyria and their structures, see the original research here.

The unofficial Guild Wars magazine.
© 2003-2011 ArenaNet, Inc. All rights reserved. NCsoft, the interlocking NC logo, ArenaNet, Arena.net, Guild Wars, Guild Wars 2, and all associated logos and designs are trademarks or registered trademarks of NCsoft Corporation. All other objects are the property of their respective owners.