In 1072 AE as the Flameseeker Prophecies began to unravel, another battle was taking place deep within the Shiverpeak Mountains: the civil war between the Deldrimor dwarves and the xenophobic Stone Summit. With the battle reaching a climax, both sides fought for power throughout the region, some resorting to different, more destructive ways to win over the other. Amidst this war a group of Stone Summit led by a single hierophant delved into the depths of Sorrow's Furnace in search of one thing – the Tome of the Rubicon.

The tome was said to have been written by the Great Dwarf and within it was the true name of his greatest foe, the Great Destroyer. The Summit planned to use the tome to find and speak its name allowing them to summon the Great Destroyer into the world; however, before they could open the tome, a group of heroes led by the tome's keeper High Priest Alkar of Deldrimor intercepted the Summit, claiming the tome in the process. The priest, believing the tome to be too dangerous to keep around, buried it under the dwarven ruins leaving it to be forgotten forever.

But that was not the end of the tale, for Alkar later lead an excavation group to dig up the tome. Alkar translated the tome, revealing that it not only held accounts of the early days of the dwarves but also details about a specific event – the final conflict between the dwarves and the destroyers.

In the years since the retrieval of the Tome of the Rubicon, the world of Tyria had seen its fair share of dangers. In the far south an ancient evil brought forth a plague that swept throughout Cantha, both plots made by a forgotten god attempting to break out of his eternal prison. Each threat had been met by heroes and Tyria enjoyed moments of peace… that was until the earth began to move. It was in 1078 AE that Tyrians, Canthans, and Elonians alike were awoken to find their cities damaged with the ground rumbling beneath their feet.

Heroes once again came to the rescue, investigating the sudden swarm of terrified creatures attempting to escape the earthquakes through underground passages that had been opened by the aftershocks. Upon investigation the humans found themselves amidst a battle between the dwarves and an enemy unknown to them – an enemy the dwarves referred to as the destroyers. 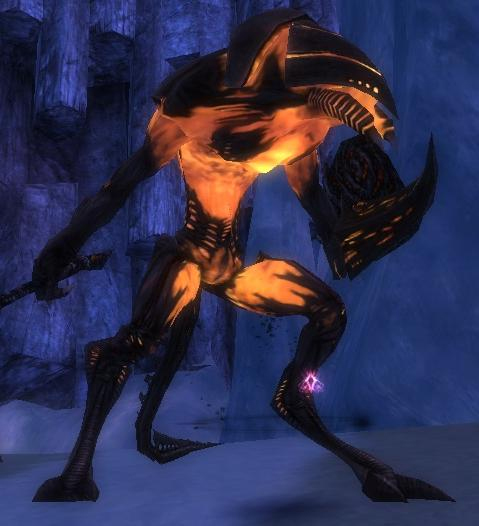 Destroyers are unlike any other creature found above or below Tyria; though made of fire and stone like elementals, they are well organized and fare more powerful. Swarming up from the ground, they hold no concepts of pity, mercy, or sorrow and simply rip through any living thing they find. Destroyers exist purely to destroy, to purge Tyria of all life and make way for their master, the Great Destroyer. Moving through the depths they are able to overwhelm entire races, forcing them to flee in terror or die in flames before moving on to seek out more life.

When the earthquakes ripped through Tyria many believed them to be natural occurrences, but those who understood what the destroyers are began to prepare for their arrival. At first the destroyers simply attacked anything living in the depths, causing races like the asura to flee to the surface; however, soon they began to spill out of exposed caverns, attacking anything they could see above ground.

One large lava-filled chamber deep below Tyria was the source of the destroyers and each moment a new one would be brought into the world to serve its master's purpose. Nearby was the Central Transfer Chamber, a central hub for the many asura gates throughout Tyria that became the destroyers' way of traveling the depths. Any area with an active gate became open to the destroyers, causing the asura to shut down any gate they could find in hopes of stopping the threat. But as more and more destroyers burnt through the depths, the races of Tyria were faced with no choice but to take the fight to them and their master that the dwarves feared so much. They took the fight to the Great Destroyer.

Norn, asura, and humans banded with the dwarves, who had undergone the Rite of the Great Dwarf to become beings of stone, and fought their way through scores of destroyers eventually taking back control of the Central Transfer Chamber. From there a small group broke through the destroyers' lines and came face to face with the Great Destroyer, confronting and defeating it under a large dragon statue that the Great Destroyer almost seemed to be guarding. 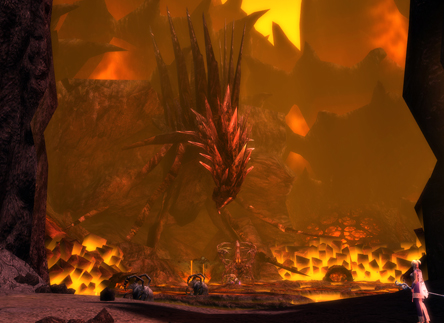 Destroyers were not seen in Tyria for many years, simply becoming another story to add to Tyria's long history of mad gods and liches. Beating the Great Destroyer had caused the loss of the dwarves who were said to still be roaming the depths in search of the destroyers. Nevertheless Tyrians would never again have to lay eyes upon the mindless creatures of fire and stone; not until the dragons awoke at least.

Primordus was the first of the Elder Dragons to awaken and with him returned beasts of fire and stone - for the statue in the chamber was an Elder Dragon waiting for his general to wake him. His eruption into the depths brought forth a new army of destroyers and this time the dwarves were not enough to stop them. And to this day the destroyers roam the depths, occasionally appearing on the surface of Tyria.

Tyria fights on all fronts, the races stand back to back against the forces of the Elder Dragons. But deep below creatures of stone and fire march – they are the destroyers.
The unofficial Guild Wars magazine.
© 2003-2011 ArenaNet, Inc. All rights reserved. NCsoft, the interlocking NC logo, ArenaNet, Arena.net, Guild Wars, Guild Wars 2, and all associated logos and designs are trademarks or registered trademarks of NCsoft Corporation. All other objects are the property of their respective owners.